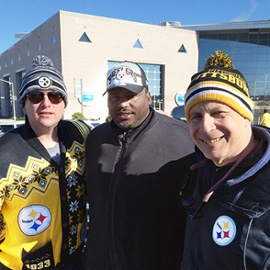 I just had a great three-day football weekend in Atlanta. My cousin, Dan Rossman, came in from Pittsburgh, my hometown, and invited me to go to the Falcons-Steelers game with him and several of his friends. We had a memorable weekend and I got an unexpected lesson.
After work on Friday, we met for a beer in the heart of Atlanta’s commercial district, Buckhead. Around 6:30 I was driving home thinking about what we’d do during his visit. I was not paying as much attention to my driving as I should have. Our traffic rivals that of the busiest cities in the United States. Add on a holiday shopping weekend and gridlock — not thoughts about the gridiron — should have been my focus.
As I waited for a light to change, an Atlanta policeman pulled up, his lights flashing. I rolled down my window. I thought, “He must think I’m intoxicated.” For the record, I wasn’t, but this was during Happy Hour, so I could see how he’d be suspicious. I asked what I had done. He said, “You’re moving left and right; you need to get in the proper lane. Move over and don’t do it again.” Then he drove off.
I thought to myself, well I dodged a ticket, a fine, and lot of inconvenience – that would have really started the weekend off wrong. But the weekend went right. We hiked, had some great meals, and visited the College Football Hall of Fame, a new Atlanta attraction.
My lesson came Sunday.
My cousin and his friends organized a world-class tailgate, and he delivered on his promise that a former Steelers player would be there. Outside the Falcons’ Stadium I got to meet and visit with Ray Seals who played defense for several years in the 90s. Ray is a member of a Super Bowl Team, which to Pittsburgh fans anywhere will always make him special. On Sunday, Ray was in Atlanta to do charity work and visit family members.
In the mid-90s, a cousin of his, Jonny Gammage, a 31-year-old African American male, died after a police confrontation. His death nearly 20 years ago sparked anger and controversy in Pittsburgh. It shares similarities with the complex issues around race and law enforcement now being widely considered and publicized around the nation.
Ray’s dad is a retired policeman. Ray spoke with great respect for the challenges, risks, and perils that police officers face on a daily basis. In his view, there are many talented, skilled, and professional police officers out there, but he noted that there are some, as in any job or profession, who are not.
Ray travels a fair amount by car.  This year he’s been stopped 15 times in various parts of the country while driving.  Each time he’s been pulled over, Ray has had to show his license and car registration. Not once has he been ticketed or charged with an offense. This is not a 2014 fluke but more or less the usual annual total for him for at least the past ten years.
I didn’t witness Ray’s prior incidents. I know that last Friday about ten seconds after my police incident, I went on my way without a license check, a sobriety check, or any check whatsoever. While I was grateful; I was not surprised. From my experience, I remember thinking my traffic stop would probably be okay for me. And it was.
All during the Falcons-Steelers game, I thought about what would have happened if I’d looked like Ray when I was stopped and what would’ve happened to Ray if he’d looked like me as he drove around the country all these years.
That’s one thing for us to think about when we read or watch the news and ponder issues of justice, law enforcement, identity, and our own realities.